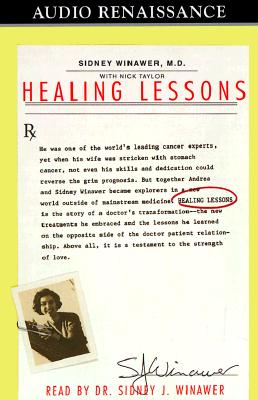 Editorial Reviews
Amazon.com Review
Dr. Sidney Winawer, chief of gastroenterology at Memorial Sloan-Kettering Cancer Center in New York City, thought he was being paged. "Winawer. Winawer," a voice called. But it wasn't the hospital's paging system that was beckoning him; it was an intake nurse, calling to admit his wife, Andrea, for her surgery for metastatic stomach cancer.
While Winawer had treated thousands of cancer patients before his wife became ill, seeing Andrea wearing a shapeless, flimsy hospital gown shocks him; how could the hospital make someone wear something that unflattering? From the invasiveness of endoscopies to the brutal side effects of chemotherapy, the treatments he administered day after day horrify him when he's forced to examine them from his new perspective. After the surgery to remove her tumor, Andrea's grim prognosis--six months to live, given that the cancer has spread to her liver--leaves him powerless and embarrassed. One of the world's preeminent cancer experts, a man who admits he entered medicine mainly for the power it provides, won't be able to save the life of his own wife.

The story gains momentum when Andrea seeks out alternative medical treatments. With hyperthermia treatments in Wisconsin and interferon shots in Atlanta, her condition starts to improve. Of course, the Winawers' access to medical care at Sloan-Kettering and the awe that Sidney commands from his peers and other doctors around the country assure them immediate appointments; they also have full access to the stacks of research papers at Memorial's medical library. Their wealth allows them to even ship tumor tissue samples on dry ice to a doctor in Bern, Switzerland, to check for somatostatin receptors, a test that becomes key in their approach to her treatment. And Andrea, who never returned to work after the birth of their children and who has the luxury of a housekeeper, fortunately has the time to delve into books on meditation and the mind-body connection by Dr. Bernie Siegel and Dr. Lawrence LeShan.

Despite the Winawers' advantages over most other cancer sufferers, Andrea's condition eventually worsens during the following years. As she desperately resorts to supplements of vitamins and coenzyme Q-10, coffee enemas, then 10 different kinds of chemotherapy and a bone-marrow transplant, we see the family alternately falling apart and coming together. The ultimate triumph of the book is Andrea's wonderfully willful spirit. While its intricacies will be of most interest to those directly affected by cancer, the Winawers' poignant story will thoroughly move anyone looking for inspiration. --Erica Jorgensen --This text refers to an out of print or unavailable edition of this title.


From Library Journal
Winawer, a top cancer specialist, recounts his unexpected personal acquaintance with the disease when his beloved wife was diagnosed with stomach cancer. His being head of the Laboratory for Gastrointestinal Cancer Research at New York's Memorial Sloan-Kettering Hospital makes his revelations here all the more poignant. Winawer was forced to realize the limitations of traditional medicine, to look at the role emotions and alternative medicine can play in healing, and to reevaluate his method of practicing medicine. Beautifully relating the complexities of the experience of illness and the struggles of the human soul, Winawer's excellent book should be read by physicians and the general public alike. Recommended for public and medical libraries.?Kristine Benishek, Shank Memorial Lib., Good Samaritan Hosp., Dayton
Copyright 1998 Reed Business Information, Inc.
Editoriale Recensioni